THE FUTURE OF PINELLAS COUNTY WITH COVID-19 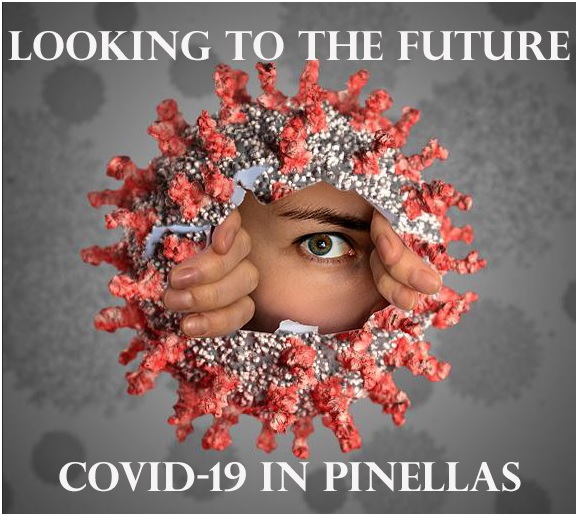 The unfathomable losses and upending of normal life, coupled with continued threat of infection, have created a deep angst and uneasiness among even the toughest of people here in Pinellas County.  The fear of eviction, unresolved grief, the closing of businesses and schools. It batters our security on so many fronts; how we socialize, work, pay bills and mourn. That nagging feeling that if Covid-19 has not impacted you or your personal circle yet, it is only a matter of time before it will.

Thousands of your neighbors in our county already know unemployment, months of unpaid rent and bills and wondering where the next meal or tank of gas will come from. Hundreds of business owners are wondering how much longer they can hold on, when there appears to be no end and no help in sight. Getting through today is the only goal they can focus on, because looking past that is terrifying.

At the beginning of July, nationwide, we have more than 125,000 dead, from 30 to 40 million jobs lost, and the infection rate is accelerating, not decreasing. Here in Pinellas, there are 135,000 known cases (likely triple that number in reality), along with 3,400 deaths and 15,000 in hospitals right now. Lengthy isolation. Fear of a second wave. Attacks by cops. The latest numbers clearly show the worst is ahead of us and not behind us.

Our local economy is in shambles with thousands of businesses expected to close permanently and over 180,000 unemployed or living off drastically reduced income. Those able to fight to remain open face declining sales, customers and revenue impacting almost every facet of business.  While the doors of many businesses may be open, the majority are barely hanging on. The famous Wagon Wheel Flea Market, an institution in Pinellas for over 55 years, is now closed permanently with over 2,100 of the smallest businesses closed for good and as many as 5000 unemployed. When you have massive companies like Boeing on the verge of collapse with 400 unsold planes sitting in storage (even with government funding), what hope does the little guy have that his business will survive?

Movie theaters, concerts, malls and sporting events may never return in the way we remember them. Covid-19 is not going away and we face a new reality of life that doesn’t look anything like the lives we fondly remember from just a few months ago.

We watch on TV as police brutality fills every newscast, our cities burn, and protesters are beaten and tear gassed with the Whitehouse in the background. Here in Pinellas, we see images of the St. Pete police throwing explosives at peaceful protesters and Sheriff’s deputies chasing down people and arresting them for conducting constitutionally protected activities. Deputies in riot gear swarming over a crowd of young people in front of the St. Pete PD for expressing their disgust in local police conduct. Sheriff Gualtieri sure showed them. Then he violated their due process rights by having a little chat with a judge to deny them bond so he could keep them in his Covid-19 infected jails. It is an election year and Gualtieri can’t afford to have protests about his policing tactics in Pinellas!

For many Americans, the pandemic has shattered trust that somehow we’d come out all right. That the government had our backs, that the hospitals would have enough equipment. That the police would protect us.

The Kaiser Family Foundation reported that at the end of March, nearly half of adults surveyed felt that stress related to the coronavirus had a negative impact on their mental health. That is only bound to increase as the pandemic drags on. There are grave concerns for the mental health toll of our youth facing no school or socializing, no proms they have looked forward to their entire short lives and an uncertainty of a future that looked difficult a few short months ago that now looks bleak and scary. While they may not fully understand the long-term impacts of what they are going through right now, the damage is done.

Here in Pinellas County, our problems have been compounded by over aggressive policing, unconstitutional business closings and draconian measures that were implemented with the heavy fist of a Sheriff drunk on his new found power to control and intimidate the people of Pinellas. Sheriff Gualtieri sent out an army of 200 armed soldiers to post bright yellow flyers on over 40,000 businesses, with warnings to store owners and patrons alike, very reminiscent of the Nazi’s that posted warnings not to patronize Jewish stores in the late 1930’s. 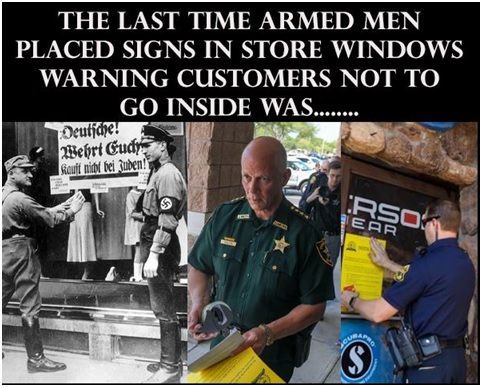 Sheriff Bob set up a military style command post in Indian Shores and sent out a battalion of men with guns and bullet proof vests to blanket beaches, rope off parking lots and order people to remain 6 feet apart, even though beach breezes made the 6 foot rule literally meaningless.

The people of Pinellas don’t need to see a full scale military response to a virus adding to the stress they already are feeling. We don’t need to be terrified that we will be arrested if we dare open our businesses or try and feed our families or pay our bills. We don’t need the threat of being arrested for doing what we have all been legally doing our entire lives adding to the threat of death, losing our income, our homes and possibly family members. 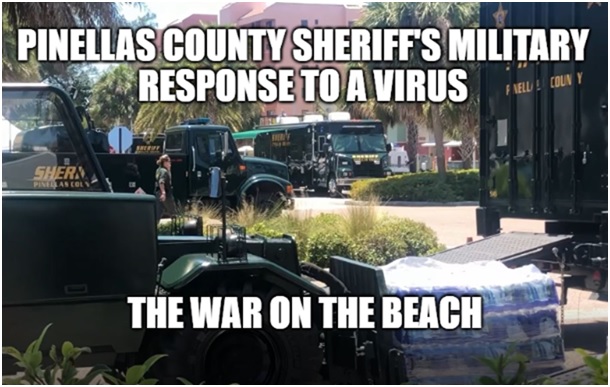 “Make no mistake, we’re not playing around with this,” Gualtieri said. And Gualtieri followed through on that promise by personally ordering the arrest of business owners here in Pinellas. Gualtieri ordered the people of Pinellas to stay inside their own homes if they were deemed “non-essential” by Gualtieri himself.

Gualtieri implemented these harsh gestapo type orders and edicts at a time when we had about 1,500 new cases of Covid-19 per day.  The army of 300 PCSO deputies and the military beach command post and business closings are mostly no longer there, even though we now approach 10,000 new cases per day here in Florida. If things are ten times worse now, and businesses are open, that proves that Gualtieri’s lockdown was an over the top draconian response that would merely traumatize the people of Pinellas. Many of whom will be facing some of the hardest times ahead that most of them have ever faced in their entire lives. Adding over-policing and threats of arrest for merely leaving your home or trying to feed your family was the worst thing any Sheriff could have possibly done. Gualtieri doesn’t care, why should he? He won’t be arrested and he will still collect his big fat taxpayer funded paycheck.

Sheriff Bob Gualtieri and his wife (Pasco judge Laurlee Westine) bring in over $335,000 a year in government guaranteed paychecks funded by YOU the taxpayers. They live in a mansion and are not at all concerned with where their next meal will come from or if their mortgage payment will be made because they get that money each month from your pockets. It doesn’t affect Bob or Lauralee if he closes your business or costs you your job. He and his family are safe thanks to your hard earned tax dollars. 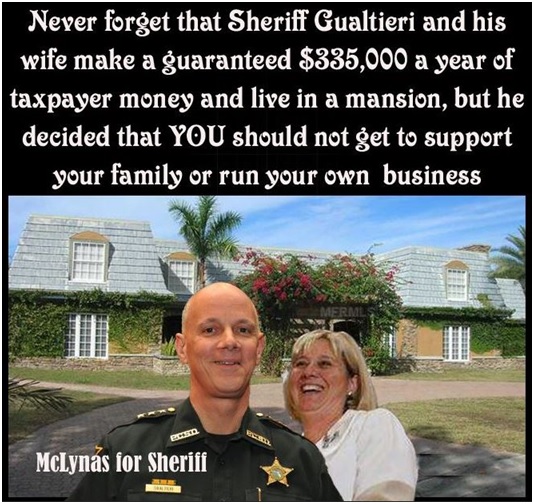 As your next Sheriff, I understand the hardships most people in Pinellas are facing. As a single full time parent for the last 8 years, I know how hard it is for most to feel secure in their futures. My own interests have been heavily impacted by not only Covid-19, but also Sheriff Gualtieri’s heavy handed police state actions.

This upcoming election is literally the most important vote you will cast in your lifetimes, as your very freedoms, your businesses and the future of yourselves and your families will literally depend on who is in charge of the local police industry.

As your Sheriff, I will steadfastly support your constitutional rights and will NEVER criminalize constitutionally protected activities such as opening your business, leaving your home or your freedom to travel or enjoy the beaches, nature and outdoors that we cherish here in Florida. I believe in personal responsibility and educating the public, rather than threatening to use force against peaceful people. I am positive that handcuffs and caging people is NOT the way to address Covid-19 guidelines. If people feel “safer-at-home”, they are more than welcome to stay there as much as they like, however, I will never be arresting those that do not. We don’t need a Sheriff that will put people in handcuffs for not wearing a mask, when I have never seen Gualtieri wearing one himself, have you?

As your sheriff, I have the ability to end cannabis enforcement and not only save taxpayer’s $100,000,000 each year wasted on enforcement, (link)  https://mclynasforsheriff.com/3635-2/
but to allow Pinellas to become the ONLY true “cannabis friendly” county in America and help us double tourism in 2021 to heal our economy.

The calls for “defunding” the police are based on America’s realization that pumping the majority of local municipal budgets into policing has only gotten us costly mass incarceration,  policing for profit and a police industry and courts that prey upon the very people that fund them.  As your Sheriff, I can “defund” the Sheriff’s office by applying more of the Sheriff’s budget towards helping our community rather than preying upon it.

We need a positive vision of what recovery will look like, and that positive vision comes from a new Sheriff that understands that using force and handcuffs on a traumatized community is NOT what Pinellas needs.  Won’t you join me by donating, supporting and voting for the ONLY Sheriff that understands what the people of Pinellas County really need and the ONLY Sheriff’s candidate fully prepared to provide it. Vote James McLynas for Sheriff of Pinellas County Florida and FREE PINELLS.