Eliseo Santana’s has Bankruptcies, Foreclosures and Financial Court Judgements, but He Wants To Run The Sheriff’s Office? 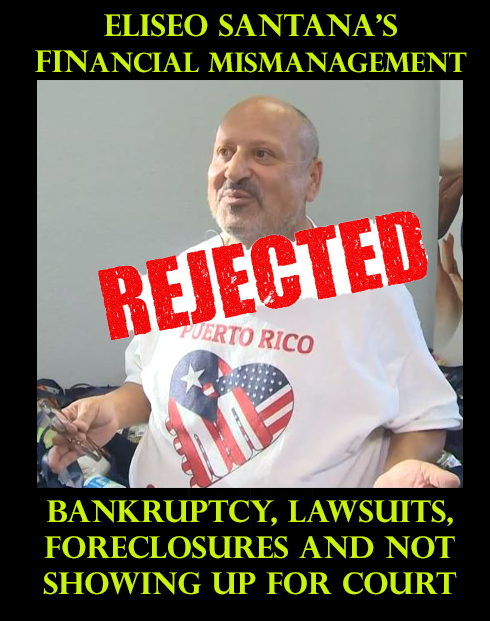 However, another issue was raised in the March 2020 election for Clearwater City Council about Eliseo Santana’s ability to manage city budgets effectively. The Tampa Bay Times reported that Eliseo Santana had financial issues over the last twenty years.

“His past financial issues include a 2012 foreclosure, a 2013 bankruptcy and a final judgement against him in January for $4,000 of unpaid credit card debt. Santana said he’s struggled just like “millions of people affected by the financial collapse.” TBT. I wasn’t aware of any financial collapse in January of 2020.

A quick review of the bankruptcy and foreclosure filings indicate many years of financial mismanagement.

On April 20, 1999, Atlantic Mortgage filed a foreclosure action against Eliseo Santana. This was during a period where he was collecting benefits from the government as well as receiving his salary from 25 years at the Sheriff’s Office as a maintenance supervisor. There was also no “financial collapse” in 1999. Allowing a mortgage on a property to reach foreclosure is troubling. We all have issues and trouble in life, and if it was just this one filing, perhaps it was a blip on an otherwise responsible financial record. However, there is more trouble to come.

Ten years later, on December 7, 2010, Nationstar Mortgage filed another Foreclosure on property financed by Eliseo Santana. On March 8, 2013 a Writ of Possession was issued to the Sheriff, and the same Sheriff’s agency he was working for at the time came and evicted him from the property on March 14, 2013. 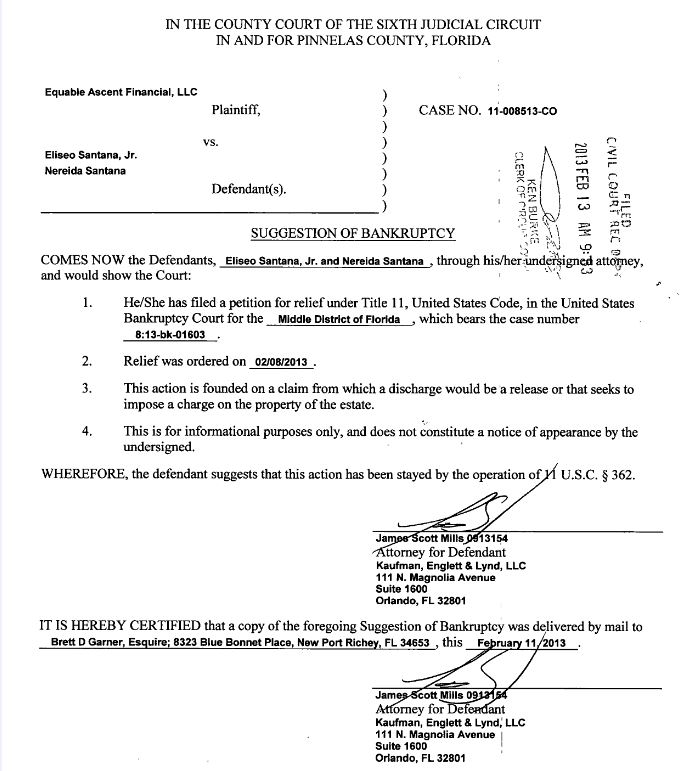 Well, maybe that was nine years ago, back when Sheriff Gualtieri was first appointed by Rick Scott to take over for Jim Coats. Maybe Santana put all his financial troubles and mismanagement behind him. Perhaps it was just a run of bad luck or a perfect storm of financial issues that created that 5 year run of foreclosures, lawsuits and bankruptcies. Apparently not.

On February 1, 2019, Capital One credit card company filed a lawsuit against Eliseo Santana for failing to pay over $4,000 in credit card charges he accrued on a card they issued to him in good faith.  A review of this lawsuit also shows the same pattern of Eliseo Santana NOT hiring an attorney and in a very bizarre twist, filing hand written documents with the court. The only time I have ever seen this done was with inmates in prison which are not given access to computers or printers. Any Kinko’s or Fedex mail center has computers you can access and print from, however, Mr. Santana’s actions indicate he has no access to a computer or printer in March of 2019. 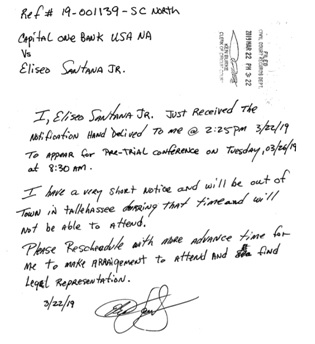 Mr. Santana’s bizarre and irresponsible behavior continues into the end of 2019 where Mr. Santana, still without an attorney, fails to show up for yet another hearing and a Default Judgement is entered against him on January 8, 2020, THIS YEAR!  A “FlaPol” article from January 7, 2020, , announced Eliseo’s candidacy for Clearwater City Council the day before this judgement was entered! 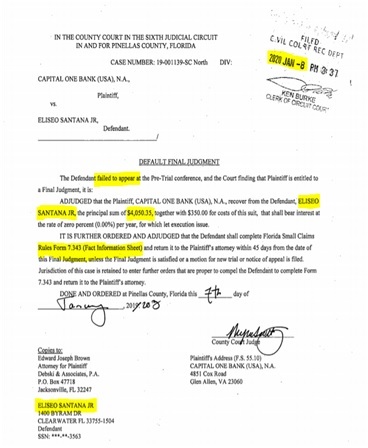 Here we have Santana, literally in the middle of being sued for not paying his credit card debt, and he decides what he needs to do is run for Clearwater city council to manage the finances of the City of Clearwater?

Santana claims to have a Master’s degree in business administration, but he doesn’t seem to possess the skills to manage his own personal finances, respond to critical court notices or even have the wherewithal to show up at hearings he is required to attend. From 1999 all the way through 2020, there is a history of financial mismanagement, failure to pay and failure to properly respond to court cases. That’s twenty years of financial mismanagement.

The people of the City of Clearwater sent a resounding message of rejection for Eliseo Santana with only 3,369 votes from Clearwater’s 116,478 residents which is a mere 2.89% of the Clearwater population. Santana’s financial woes were known at the time of the election.

During his campaigning for School Board in2016 as well as his run for Clearwater City Council in March of 2020, and now his run for Sheriff in June of 2020, Santana’s message seems to be a repeat of the same old message. I can fix what is wrong with the schools, I can fix what is wrong with the City of Clearwater, and now he claims he can fix what is wrong with the sheriff’s office. How can Eliseo Santana fix anything if he cannot even fix his own personal finances or even show up for court? How is someone that runs up a $4,000 credit card bill and then refuses to pay it going to run a $300,000,000 Sheriff’s Budget? How is someone that will not even hire himself a lawyer to deal with serious court cases against him going to hire and properly staff the Sheriff’s office?

His basis for asking people to vote for him is basically that he is Hispanic and that is how he will fix everything, because he understands what is wrong because he claims to have experienced racism. In a recent Zoom forum for the National Pan-Hellenic Council, co-sponsored by the Upper Pinellas and St. Petersburg branches of the NAACP as well as the Pinellas Urban League, Mr. Santana said multiple times that people should vote for him because “I am one of you”.

Santana was challenged by his democratic opponent James McLynas, also running for Sheriff, when Mr. McLynas objected to that type of appeal to voters based on the race of the candidate. Candidate McLynas stated that it was wrong to ask people to vote for someone based on their race. He went on to say that he himself was half, 50% Hispanic, but he was not asking people to vote for him because of his Hispanic lineage and did not condone asking people to vote for him or anyone else because of race. He stated that voters should vote for someone that has a great platform, concise plans for change and the strength, willingness, and tenacity to follow through with those ideas and changes. He further went on to state that Santana did not have an expansive platform other than some general statements and token measures and would not be capable of fulfilling any change because he worked for the Sheriff’s office for over 30 years and didn’t change anything the entire time he was there.

In March of 2020, Eliseo Santana was brutally rejected for Clearwater City Council.  Three months later, he decides to run for Pinellas County Sheriff. He was rejected by the people of Clearwater for a city council seat where he would have a one fifth say in how the $138,000,000 Clearwater budget would be spent. With that recent election result of 14% of the vote or 2.89% of the population, Santana came to the conclusion that the people of Clearwater and the people of Pinellas County would trust him with 100% decision making on a Sheriff’s budget more than double that of the city of Clearwater?  It seems that poor decision making for Santana is not limited to his personal finances. It also seems to affect his ability to know if he is a viable candidate or not.

Instead of working to fix what is wrong with the Pinellas County Sheriff’s office Mr. Santana, perhaps you should work on getting your own house in order.

Mr. Santana, if you need help. I will be needing someone with experience to implement my body camera program as soon as possible.  Let me know if this is something that may interest you. Maybe we can both work to get you on your feet again and help your family.