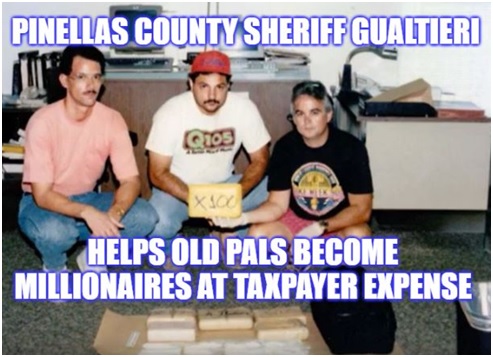 Ending the Practice of Two Paychecks Per Deputy at the PCSO

Looking back at that old photo of Sheriff Gualtieri with a full head of hair and a pornstache, it is hard to believe that he would be instrumental in helping the Pinellas County deputy to his right, George Steffen, become a millionaire at taxpayer expense. Much less help him pocket that million dollars in taxpayer funds in less than three years. Most people would find it unfathomable that any “public servant” could walk away with over a million dollars in their entire lifetimes, much less in just a few short years. However, Sheriff Gualtieri made that corrupt dream come true for dozens of PCSO deputies at taxpayer’s expense since he has been Sheriff.

The scam starts off with an intentionally created loophole in Florida government employee pension law, and a corrupt official like Gualtieri willing to help facilitate the scheme. Multiple Pinellas County Sheriff’s deputies received checks of over a half million plus dollars EACH under a massive cash giveaway program for government employees called the Florida’s Deferred Retirement Option Program (DROP). Imagine a “gold watch” at retirement, but instead it is over a half a million dollars in cash.

The basic concept for the program is to entice highly paid senior position officers to leave so that opportunities will open up for younger and cheaper staff members and to give them an incentive to stay. The problem is, that when these overpaid staff members collect their millions of dollars for leaving, Sheriff Gualtieri just hires them right back for higher salaries, defeating the entire purpose of the program, and allowing these formerly over paid employees to become massively overpaid employees.

Sheriff Gualtieri first arranges it so retiring deputies can pile up overtime just before retirement to fatten their pensions right before they leave. Then he arranges for them to not work for months to use up all of their “sick pay”. Then, Gualtieri arranges it so he allows them to keep their massive pensions, the half million dollar cash payoff for agreeing to leave AND a fat new paycheck on top of it all when he just rehires them back. They quit just so that Gualtieri can hire them back so they can collect TWO paychecks! It’s called double dipping and that was the plan worked out in advance with Gualtieri before they even left. 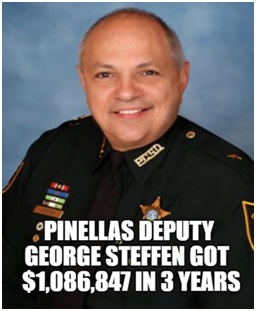 As an example, Pinellas County Deputy George Steffen, 57, retired from the Pinellas Sheriff’s Office under the program and was literally handed a check for $570,847 through Florida’s Deferred Retirement Option Program. Steffen is also receiving a $8,970 monthly pension. To complete the scam, Gualtieri then rehired Steffen back, even creating an entirely new position for him called an “assistant chief deputy”, with an even fatter paycheck than his old job of $149,350 per year. 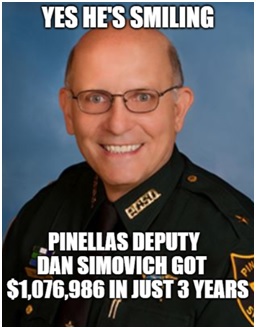 In another example, Pinellas Deputy Dan Simovich collected $540,968 for agreeing to retire early. He also receives a $9,132 monthly pension and a short time later, he too was rehired in a new position earning a $155,000 annual salary in a newly created position. He now clears over $22,000 per month, or $268,000 annually ($128.50 per hour) working as a Pinellas County Deputy and he still gets to keep the $540,968 he got paid under false pretense for retiring to “help save the department money”. That is more per year then the Governor of every one of the 50 states earns for running an entire state. Simovich mans a desk at the Ulmerton road sheriff’s office.

These two Pinellas County deputies alone received over $3,741,815 in compensation and benefits from Pinellas County taxpayers in just the last five years, but there are dozens more.

In 2015 alone, Sheriff Gualtieri “rehired” 10 retired PCSO deputies and enrolled them in the double dipping scam. Most of the top command staff at the PCSO are double dippers, which is why none of them ever try to run for Sheriff to unseat him. They know that being a “double dipper” will taint their chances to become sheriff, just like Gualtieri planned.

Several of the deputies returning after their big fat payoff and now collecting double dip paychecks have had issues as well. Pinellas County Maj. Kirk Brunner oversaw the jail when Larry Germonprez was murdered by PCSO Jail deputies and he assisted in the cover up and obtaining no discipline for the guards. Sheriff Gualtieri didn’t give Germonprez’s wife and children a penny, but deputy Brunner received a big fat payday. Maybe Deputy Brunner “earned” the multi-million dollar windfall for helping Sheriff Gualtieri cover up the murder of Germonprez.

Even though there are now dozens of deputies hired back and “double dipping” for literally millions of dollars of your tax money, Gualtieri said “This is not in any way, shape or form a buddy system, a good old boy system.” Whatever it is, it is a lot more disgusting than just the “good old boy system.” Comments by Pinellas County Sheriff’s deputies on the web forum (LEOaffairs) seem to have a better explanation stating “By recycling these people back into their old jobs Gualtieri is preventing others from moving up. Why were these folks hired back? Political loyalty and payoffs so that they do not run against Gualtieri. Fowler, Brunner, Steffen and Simovich all know where the skeletons are and have the potential to unseat Gualtieri. They are making a mint double-dipping so why should any of them make waves?”

Sheriff Robert Gualtieri has turned taxpayers into suckers that fund his deputy “get rich quick” schemes to buy loyalty and maintain his seat as corrupt head of the Sheriff’s office.

In a 2012 “Politifact” article from the Poynter Institute, they examined Candidate and former Sheriff Everett Rice’s potential “double dipping” status should he be elected in the 2012 election against Sheriff Gualtieri. Rice offered to donate his “double dipped” second paycheck to the Florida Sheriffs Youth Ranches. Sheriff Gualtieri called Rice’s gesture “an empty afterthought”. Yet Gualtieri went on to be instrumental in creating the largest group of double dippers in PCSO history. Rice even pointed out that Sheriff Coats, who hand picked Gualtieri to succeed him was also a double dipper and so will Gualtieri when he leaves the Sheriff’s office for other greener pastures.

Had enough yet? Or do you want to let Sheriff Gualtieri rip off the taxpayers and make a few dozen more deputies millionaires at your expense? Elect James McLynas for Sheriff of Pinellas County Florida and END this runaway scam by the dirtiest Sheriff ever, Bob Gualtieri.